​The Belton HS Powerlifting Team wrapped up their meet season in Oklahoma City, OK for NASA HS Nationals the weekend of April 2nd and 3rd. We trained through every meet this season all in prep for the final goal of hitting our biggest weights when it counted and winning Nationals and our kids did not disappoint. The girls secured their honor Saturday by winning both Power Press (inclusion of clean) and Powerlifting (inclusion of deadlift) Team National Championships! The men’s 114-181# weight classes competed well on Saturday to pull the team championship quest into a two team race with defending national champs Kearney HS after separating ourselves from the eventual 3rd place team from Texas and 4th place team from Oklahoma. The men’s 198-SHW classes came down to the last deadlift for almost every weight class. Our men’s team won the combined fr-sr Power Press National Championship by two points over Kearney 113-111, but fell short in the Powerlifting National Championship by two points 106-108. Our men’s team was disappointed because they fell just short of their goal, but as a coaching staff we could not be more proud of the work they have put in. There were tears of joy as well as tears of sorrow over the two-day meet and not all of them were shed by the athletesJ. Setting all team and individual accomplishments aside, what a special group of young adults.

The judging was strict, but consistent. Pirate athletes broke 8 all time NASA National Records and 39 all time NASA Missouri State Records! Each year NASA gives away a $600 championship belt to the top pound for pound strongest lifter in all weight classes for both the Power Press and Powerlifting divisions. Zach Willis won both belts, which has only been accomplished two other times in the 32 years of running NASA HS Nationals! Individual results below. 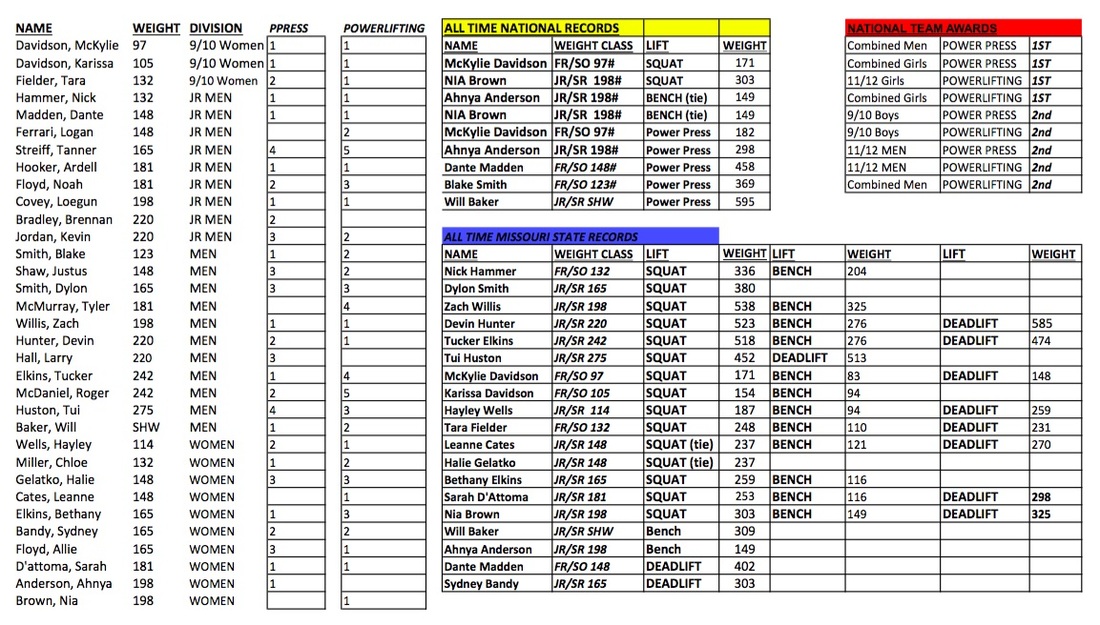