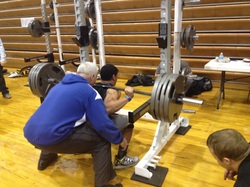 9th Zach Willis won the overall JR Division for all four weight classes for top Pirate Power Point Performance with 490 Power Points, which would have also won his mens division weight class. In the process he posted the top 9th/10th strength index of 5.67, which was the second highest of the entire meet. He also had the highest standing broad jump of the entire meet and set all time meet records for the Junior Division in squat, strength index, 3 lift total, and Pirate Power Points. The picture to the left is of Zach squatting 405x5 reps  putting him at a 465 rep max.
On March 2nd Belton hosted the 3rd Annual Pirate Power Performance Invitational. The meet assessed athletes in six areas: squat, hang clean, bench, pro agility, standing broad jump, and vertical jump with a point value given to each one. The competition was a strong field with top powerlifting teams from MO and Kansas.  Belton 9th/10th boys division won the meet, as well as the 11th/12th grade men with the women finishing in second place. Belton athletes did very well on the day and finished the day as the Invitational Overall Champions.. Belton edged out Basehor Linwood (4x defending class 4A KS state powerlifting champions) for the overall team title with the third place plaque falling to Kearney, whom has consistently placed in the top 3 at NASA Nationals. The meet included over 200 athletes competing in 3 divisions with a total of 12 weight classes. While we didn’t have the largest team we did come out triumphant with the overall team title. 30 of the 43 Belton competitors finished top 8.  The mens weight classes averaged 20 per class, while the women had 16 in each of their three weight classes, so a top 8 finish with the caliber of competition was a good accomplishment.

Individual accomplishments were as follows:

Congratulations to all the young men and women that lead to the championship performance. I also want to thank Michele Norman, Janatha Steen, Justin Hamilton, Ken Peek, Whitney Loe, Mark Thomas for volunteering to help as judges and for the behind the scenes help with putting on the meet as well as the numerous former and current athletes that were used as table workers and judges.  I also want to thank Bob Newell and Gay Anderson for their assistance. This event takes 40+ volunteers to pull off and I appreciate all the help.  I also want to thank Belton Booster Club for their donations, Kathy Mahoney and her help securing donations from Quick Trip as well as Maurer’s Southland Sports, Tractor Supply Company, SKO Fitness, Dean’s Trophies, HYVEE, Hammer Strength, and Advanced Exercise Solutions.
Proudly powered by Weebly